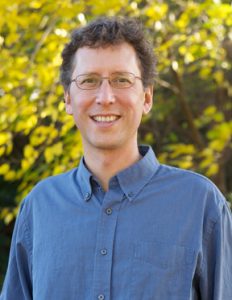 After a search for a Senior Terrestrial Ecologist that began last October, we are pleased to announce that Dr. Nick Haddad has been selected for this faculty position.

Haddad will begin his joint appointment at KBS and MSU’s Department of Integrative Biology on August 16. He will be bringing his ecological expertise and leadership experience to the table as he helps to lead the KBS LTER.

“Nick has spent his whole career doing large scale, and now long-term, experiments on the effects of habitat fragmentation on species diversity and composition,” said Kay Gross, KBS Director. “He will bring a focus on landscape level questions that are based in ecological theory to the LTER.”

Haddad’s primary research focus is on conservation ecology, and he comes to us from North Carolina State University, where he has led the Conservation Corridors project for over 20 years and studied rare butterflies.

“Nick has established one of the best experiments investigating how landscape connectivity influences plant and animal populations and communities,” said Jen Lau, KBS associate professor and LTER researcher. “It’s now textbook work, and having a faculty member who is asking such big questions join our team is really exciting.”

Haddad’s experience with large-scale long-term experiments, as well as administration, will prove to be a great asset to the KBS LTER. He is excited about the opportunity to work here as both a researcher and a leader. When he saw the initial job posting, he said he immediately thought, “This would be perfect.”

“This is exactly the kind of leadership role I aspire to. I’m very excited when I think about the 30-year history of the LTER and the incredible science that’s been done here,” said Haddad. “I look forward to the new possibilities for the future.”

Haddad hopes to conduct research at the LTER that integrates natural and managed environments, and adds to our knowledge of systems and an increased number of species. He also looks forward to greater collaboration between researchers at KBS and the broader LTER network.

“I would love to see involvement from researchers in the natural sciences and agriculture, as well as social scientists,” said Haddad. “We can be synergistic and solve more problems together.”