Home | Stories and blog posts | My time as a REU: Learning the research process

There are pages and pages that I could write about everything that I learned during my summer at W.K. Kellogg Biological Station (KBS). Each individual that I encountered had such an incredible passion for their work that I felt like I was constantly inundated with new knowledge—from dinner table conversations with my friends to paper discussions with my lab. Not to mention that I had little “real” research experience prior to KBS. Long story short, I learned a lot this summer. And that’s exactly why I’m not going to write about everything I learned. Instead, I’m going to write about something quite different- failure in science. 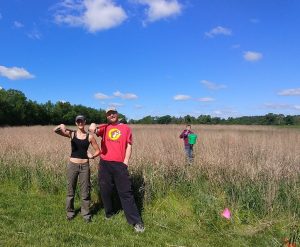 Embracing the failure side of science at KBS

I had a very successful research experience and produced a poster that tells an interesting story about switchgrass, microbes, and soil, it was a long path to get there. However, that path had a lot of failures, in many different shapes and forms. Here are some highlights and what I learned from them.

When we initially began planning my summer research project, we designed an experiment that would investigate microbial responses to drought in switchgrass. It was well thought out and covered a topic which I was interested in. Then we started planning out the logistics of the experiment.  It was then that we started thinking about the logistics, and realized that the execution of our experiment would require 420 pots. Considering the time frame, measurements that needed to be taken, the number of hands we had available, and a whole other greenhouse experiment… the task was insurmountable.

In short, we failed in investigating every little thing that we wanted. However, after reassessing, we were able to narrow in on a more specific question and cut out treatments that we had originally planned. This turned out to be a good decision, because with significantly fewer pots (only 180) we were able to take more measurements, and still got interesting results. It turns out that the soil treatments (rhizosphere, bulk, or sterile) had a huge effect on different life stages of switchgrass. Germinates (more mature plants) did better in the sterile soil because of nutrient release from dead microbial cells, whereas seeds did better in live soil, indicating that seed growth is more controlled by the microbial community.

Once the experiment was rolling, and everything was set up in the greenhouse, we spent the days taking measurements and working on various lab tasks. There were a few missteps and mistakes in the lab work and watering/measuring of the plants, but nothing that was too disastrous. Everything turned out in the end. That said, I learned the importance of not being afraid to ask when you are unsure about something. I was sometimes intimidated by the knowledge that I didn’t have, and was afraid to ask questions because I didn’t want to seem “stupid”, but as the classic teacher question goes “there’s no such thing as a stupid question”. Plus, asking about something could end up saving you a lot of time and, potentially more importantly, sleep.