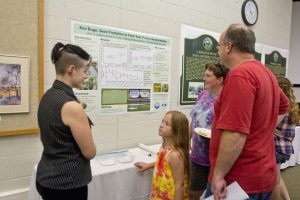 When I tell people that I started my collegiate career at a private arts school in Chicago studying fashion design, they give me an incredulous look and ask, “Why in the world would you decide to become a biologist?”  After raising an indignant eyebrow, I tell them:

In 2012 I moved to Chicago to study fashion design at Columbia College Chicago.  I was in the heart of an amazing city, doing what I loved.  I derived great joy from telling my poor state university-bound peers about my “dorm.”  While they lived in a tiny room with bunkbeds and two cramped desks, I lived in a four-bedroom, two-bathroom apartment with a full kitchen, granite countertops, flat-screen TV, floor-to-ceiling windows, and, perhaps most coveted by my not-so-lucky friends, air conditioning.

My days were casual and unburdened, for classes were considerably easy for me.  My sewing skills were far beyond those of my fellow students, and design came naturally to me.  I had a bright future in fashion, wonderful friends, and all of Chicago at my disposal.  Even so, after three semesters, I ran like hell.

I believe that I would have found the sciences eventually, but during my third semester at Columbia, the fates aligned and gave me the inspiration to flee.  I received a position in Columbia College Chicago’s Math and Science department (yes, it was all in one).  It was full of fantastically strange people whose personalities and flair I would have placed among the artists’.  I overheard a few conversations lamenting the struggles of finding funding, but I heard many others excitedly discussing the prospect of new research.  I read the magazines that lay around the office, then started searching for answers to the questions that the articles left me asking.

Soon, I started doubting fashion.  At the pinnacle of my career in the arts I would design clothing for rich heiresses, but at the pinnacle of my career in science I could save the world.  I remember the moment that I truly considered taking up science as a career. I felt that I had been bestowed with a celestial duty.  I soon informed my advisor that I would not be returning the next semester.

After a brief time deliberating which field of science I would pursue, I picked a path that no one would have expected.  I wanted to study plants.  Up until that point I hated nature; I truly despised being in it.  Outside there were bugs, and I didn’t like tans and sunburns messing with my pallor.  Many believed that I would become an animal biologist.  I loved animals, and research regarding animals is relatively well-funded.  The public loves tigers, elephants and chimpanzees, but what ultimately supports all of these beloved animals? Plants provide the energy for all living creatures (nearly all), so I couldn’t believe there was not a greater and more public effort to study them.  I’ve heard of famous animal biologists but couldn’t recall a living plant biologist.   In short, plants needed me.

Now that I’ve learned about the complexities of flora, I have developed a profound respect for them and nature as a greater entity.  I do sometimes miss Chicago and what I left behind, but I have never considered returning.  I’m sure that if I had never left fashion I would by now be working a stable, but miserable, job.  If you are having doubts, explore your options.  I have never felt that the time I spent in Chicago was wasted, but I am happy that I was able to affirm my true path there.