Home | Stories and blog posts | A change of scenery: From community college to climate change 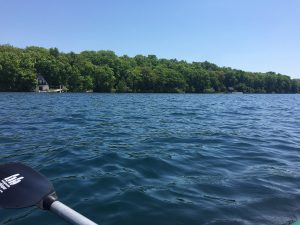 I arrived at the W. K. Kellogg Biological Station (KBS) early morning from an all-night flight from San Diego, California. I was excited to find out that Gull Lake, where KBS is located, was just as beautiful as my sunny hometown, and held more potential for growth as a scientist than I ever could have imagined. Coming from a community college, I held no prior research experience or ideas as to what life as an undergraduate researcher would be like.

The following Monday, I would begin my full-time position through the Research Education for Undergraduates (REU) program, funded by the National Science Foundation.

I began work in the Litchman Lab, working with my mentor, Dr. Tatiana Severin. We quickly began discussing experiments we’d be conducting throughout the summer, including one that would be designed by myself. As daunting as it was in the beginning weeks, I quickly began picking up new methods of conducting research and experimental design. Our research was focused around phytoplankton growth along a thermal gradient. This research would provide more insight into how climate change and ocean warming will affect different species of phytoplankton. 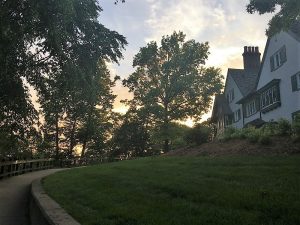 My walk to the dorms after lab work

I began by collecting data for an experiment that Dr. Severin had already designed prior to my arrival. I obtained the net growth of 10 species of phytoplankton over time by measuring the natural fluorescence of their chlorophyll α content. By exposing the 10 species across temperatures ranging from 0-31℃, I was able to observe the growth rates for each strain at each temperature, as well as calculate and compare thermal niches between summer and winter species. Results from this experiment gave insight into key differences in how summer and winter species of phytoplankton may respond to future ocean warming.

This experiment would then help me in designing a similar experiment. This one, however, focused on mortality and birth rates within a population, rather than just net growth rates. For this experiment, my mentor and I used techniques that were new to both of us. This was where I felt like a true researcher: where I’m required to think of an unexpected problem as an opportunity to further understand what it is I’m testing. A mission to find the cause, mechanism, and finally, a solution. 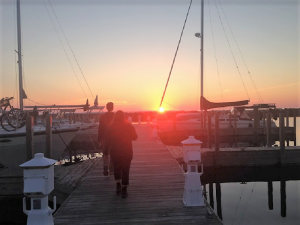 Walking on the Gull Lake marina with new KBS friends

Moving away from a community college and straight to a place where I can learn from my mentor, students, postdocs, and potential advisers was a monumental step in the right direction. KBS allowed me the freedom and structure to explore my interests and, most importantly, participate in research that is relevant to the current scientific community. Going from sitting behind a desk in a classroom, to being at the forefront of climate change research, I’d say my KBS REU experience was truly a wonderful change of scenery.