Home | Stories and blog posts | My opportunity of a lifetime

Kellogg Biological Station (KBS) 2018 undergraduate summer researcher, Samantha Turner, is a junior at Michigan State University (MSU) and a Human Biology major, with aspirations of becoming a physician. She wrote about her KBS undergrad research apprentice (URA) project working with the Conner Lab.

New experiences often shape our understanding and view of the world around us. They can influence our decisions, create new pathways in our lives, and bridge connections with new and interesting people from all over the world. This summer, I was fortunate enough to have an experience that was completely new for me at the W. K. Kellogg Biological Station (KBS).

I was informed of the KBS undergrad research apprentice (URA) positions from one of my advisors. I began to examine more about KBS, the research that goes on there, and the description of my 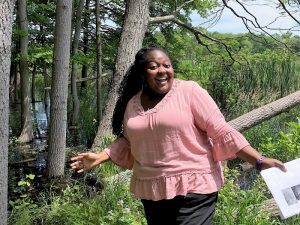 Taking a quick photo before heading to our field research site

potential position. At the completion of my investigation, I knew that I wanted to be a part of the KBS experience. After a few interviews, I was offered the position!  I was able to become a URA for the Conner Lab and had the opportunity to take two classes during the first summer session.

My summer journey began on May 21, when I started taking classes. I decided to take an ecology lecture class and its lab, totaling three days a week for five weeks. Going into these classes, I was not completely aware of their expectations and requirements, which made me a bit nervous, but also excited.

Although I did know that the courses would be accelerated in order to take place within the first session time slot, I was not aware that both classes would require students to go into the forests and nearby Long-Term Ecological Research (LTER) locations in order to collect data and to complete activities. This was shocking and took me out of my comfort zone. Originally, I was so under-dressed for going to these sites.  The class required that you have long pants and socks as a precaution against tick bites, so it took me some time to acclimate to this (pretty extreme) summer wardrobe. I learned, rather quickly, to properly adjust to the dress code and atmosphere.

My ecology lecture instructor, Dr. Nash Turley, took a somewhat unconventional approach with instructing the class by not having any slideshows or required books included in the curriculum. Instead, we would have open class discussions, group work, and nature immersed lesson plans. We also took quizzes at the beginning of each class period that were based on the previous class’s lesson plan and related articles. Our final assignment for the ecology lecture was to create a proposal for a hypothetical experiment (that each person had to conduct based on an animal that can be found in southern Michigan). In the ecology lab we had to form groups and create an experiment that could be tested about a plant species within in the Lux Arbor Reserve.

On May 22, I started working in Dr. Jeff Conner’s laboratory. Immediately upon entering the lab and meeting my mentor, Ava Garrison, I felt very welcomed. The Conner lab has a focus on the evolutionary adaptation of plants in conjunction with their environment.  This summer, I was able to assist with four of their current projects. 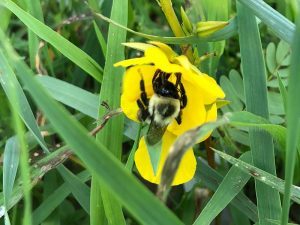 Bumblebee searching for pollen in our research plot

The first project included radish plants, some of which are the original wild radish that can be found in the Mediterranean and the others that have evolved to become a population of weeds that usually compete with wheat and oats. This experiment took place in an oat field in the KBS farms, where we observed the fitness (the amount of seeds produced) of both the native and weedy radish when in competition with oats and other plants that were growing in the field. The second experiment involved studying the effects of duplicate genes on the fitness of the Arabidopsis thaliana plant.

The third experiment took place inside of an enclosed outdoor study site called “Fort Shemske”. In this project we studied the effect of gibberellic acid on both native and weedy radish. The final experiment was a collaborative project between the Conner, Lau, and Fitzpatrick labs. The study was about the effects of different stressors on the expression of additive genetic variance in Chamaecrista plants, which are commonly known as the partridge pea. The stressors were salt (which can somewhat mimic drought), herbivory, and herbicide. In addition to controls, each stress was applied in four different levels. The initial measurements of the plants and application of the stressors, which included spending quite a few hours on the ground measuring or cutting leaves, was probably the most strenuous task that we had to perform in the field this summer. Overall, working in the lab and field was an enriching experience and I was fortunate to acquire a variety of new skills and knowledge in the lab this summer that wouldn’t have learned outside of KBS!

As I write this post of my experiences on my last day of work in the Conner lab, I am definitely filled with an array of emotions. My time here at KBS has been very rewarding in many aspects of my life. I was able to meet some pretty amazing people, some of whom I now have the pleasure of calling my friends, and I’ve been able to learn more about myself and my place in this world. Even though this summer at KBS has been trying at times, it was mostly very rewarding, and I am very thankful that I was afforded this once in a lifetime opportunity.

This guest blog was originally featured on the KBS LTER blog webpage and shared with permission.