Home | Stories and blog posts | Sharing science: KBS intern educates others while benefiting his own education

Tom Charney’s summer internship at KBS was the perfect experience at the right time, sandwiched between commencement and the rest of his life. He was interviewed by external communications intern Grace Beltowski.

Students spending their summer at the W.K. Kellogg Biological Station for the first time often leave with an experience they’ll carry with them for the rest of their undergraduate careers. But for recent graduate Tom Charney, this isn’t just his first summer at KBS; it is also his last summer as a student at Michigan State University. 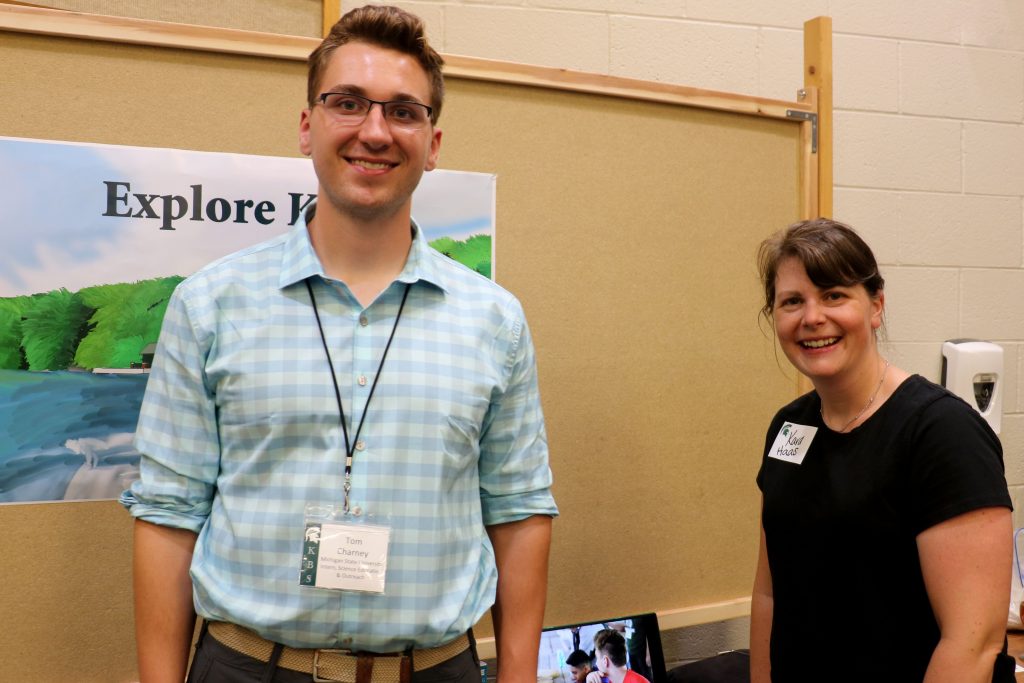 “I went to my graduation ceremony in the spring and it was everything it needed to be, but I felt like I needed a little epilogue to really wrap things up, and this is that epilogue,” said Tom of his time at KBS. “This is how I’d prefer to end things, in a pretty place with lots of people who are passionate about what they’re doing.”

Although it’s his final summer as an MSU student, coming to KBS has been a goal of Tom’s for a while.

“It was a long time coming because after sophomore year my advisor told me about it, and then I visited the campus a year back and liked how it was smaller,” he said. “I appreciate having a pocket of people because then you get to know everybody and you can make friends easier that way.”

An environmental and plant biology major from South Lyon, Michigan, Tom has spent much of his time at KBS taking his last two classes of his undergraduate degree: a plant systematics course in the first summer session, and a wetland ecology and management in the second session. He particularly enjoys how the classroom environment is different from MSU’s main campus and how engaged his fellow students are.

“I value that everyone here is really into what they’re doing,” he said. “Being here, most everyone is paying attention and they care a lot about the information that’s being handed to them, and the professors also care about handing it to you.”

Along with taking classes, Tom is the science education intern at KBS. He works under the supervision of Kara Haas, science education and outreach coordinator, to run events for youth, teachers and community members in the Kalamazoo area. One of his favorite aspects of the position is that he gets to communicate to others what he’s passionate about.

“I like to talk about most anything, but in particular I like talking about science. I want to approach research in a different light that is more people-related,” said Tom. “The internship is personalized to me because I am allowed so much creative freedom, and that is what I’ve always craved.”

One of the events Tom helped coordinate was the first-ever Children’s Day at KBS, which took place at the Kellogg Bird Sanctuary in June and helped connect kids with birds and books. Tom explained how he was given his own area at the Sanctuary to put on an event for the children, and how he made up games and activities about bird migration to engage his young audience. 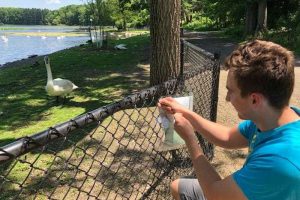 “We’re targeting younger audiences because maybe we’ll give them a goal they want to follow, or maybe if they already have a goal we’ll give them a more specific one,” he said. “Kids are really good at taking up information, but these events are important for the general public too because if they care about a natural resource or animals, then they know what to do about it, or if they didn’t care in the first place then they usually come to care.”

In addition to helping educate young students and families, Tom feels that his internship at KBS is benefiting his own education, particularly on what he might want to do when he emerges from the summer as a new college graduate.

“I am really interested in communicating environmental sciences, and this internship has given me a sharper idea of what I should be doing, or at least what resources I have available,” he said. “Even if I don’t have something lined up by the end of the internship, I’ll have the resources so that I’m going in that direction.”

For now, Tom is enjoying the time he has left as an MSU student at KBS, and he encourages others in the same boat as him to seek out similar opportunities to his KBS experience.

“If there’s anyone like me who’s feeling bummed toward the end of their undergrad or at least nervous about where they’re heading, I would say this is a very good place to come and explore your interests,” said Tom. “If you go somewhere with lots of people you can talk to and network, then things will probably work out well. We’re very tight-knit and things are discussed at a faster rate and more intimately, so I’d definitely recommend coming to KBS for that sort of environment.”

Tom’s internship experience was funded through the Richard A. Brunt Family Scholarship at the W. K. Kellogg Biological Station and the W.K. Kellogg Manor House and Estate Endowment.