Many children in the United States grow up with the notion that there are two science careers: a doctor and a chemist, working solo in a lab surrounded by bubbling beakers. Teachers across the nation are fighting that image. In my recent experience with the Skype a Scientist program, my mission was clear: tell students there is a diversity of science jobs, and stress that we work together. 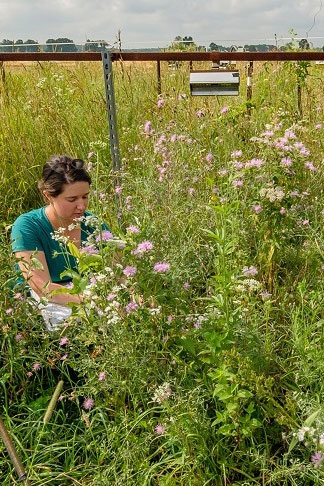 Skype a Scientist matches scientists with K-12 teachers who want to have their students interact with a scientist via videoconferencing. It can be related to a particular job or unit in their curriculum, but the teachers I connected with really wanted students to have authentic interactions with scientists and recognize that science isn’t an isolated field of white men in lab coats and stethoscopes.

The teachers and I chatted beforehand to test technology, and I sent a website link and bio so that their classes knew what I studied. We decided that I would briefly introduce myself and my research, but mostly spend time on Q&A. I talked for a few minutes about climate change and biodiversity, then opened the floor for the students to ask anything they wanted. I was incredibly impressed with the range of topics the students were curious about.

I worked with a fifth-grade class and two high school classes in AP Environmental Science and AP Human Geography. Their questions ranged from, “What plants will kill you?” to how new technology helps breed plants for survival in the face of climate change and increasing food demand. Those two questions came from both the fifth graders and high schoolers, although the former’s exact wording was, “Can we combine Venus fly traps with watermelons?”.

These students were genuinely curious about plants and the natural world. Their knowledge already far surpassed anything I was thinking about in fifth grade, and I’m now a botanist! They were thinking about how many trees were on the planet, where pollen sits on a pitcher plant, and how agriculture impacts their local parks and forests. Even so, not many seemed aware that a scientist could study plants, microbes or butterflies, or even work outdoors. There’s a lot of mystery surrounding the day-to-day of science, and Skype a Scientist, by connecting K-12 classrooms with scientists in jobs in all different fields and all over the world, is helping students realize that scientists are just like them—students.

All being a scientist means is that you ask a lot of questions and enjoy seeking answers. I hope that, given the question “How can I become an ecologist?” from an AP environmental science student, talking with scientists encourages that curiosity and drove home the idea that every single one of those students could become scientists.

Meredith Zettlemoyer is a Ph.D. candidate in the Lau Lab at KBS. She is a plant ecologist, and her studies include how human-caused changes (like rising temperatures, increasing levels of nitrogen fertilizer) cause plant species to disappear.