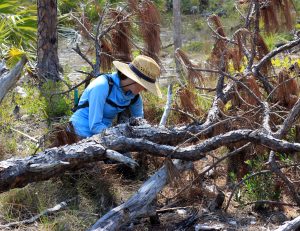 What happens when a major hurricane careens through a rare, fragmented ecosystem? North Carolina State University researcher Erica Henry and others, including W.K. Kellogg Biological Station ecologist Nick Haddad, found themselves in a position to examine that question when, in 2017, Hurricane Irma swept over an area of south Florida that encompassed several of their research sites.

Since 2015, the team had been studying the effects of human-driven habitat management on some of the remaining pine rockland ecosystems, home to the rare pineland croton (Croton linearis), a shrub that in turn supports two endangered butterflies: the Bartram’s scrub-hairstreak (Strymon acis bartrami) and the Florida leafwing (Anaea troglodyte). One area of focus, on Big Pine Key, sustained a direct hit from Irma.

Prior to the 2017 hurricane, Henry and her colleagues had been studying whether mechanical clearing using heavy equipment could act as a substitute for prescribed burning in areas where the latter was impractical. Afterward, the team had an opportunity to investigate whether disturbances from management plans—mechanical clearing or prescribed burns—improved the resiliency of pineland croton in the wake of a major hurricane. 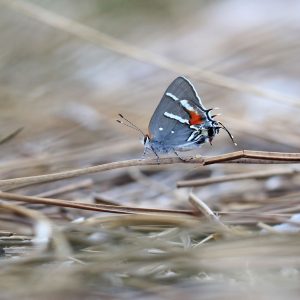 Their results suggested that management plans in sampled areas contributed to increased post-hurricane survival rates for pineland croton, but that results varied depending on where the areas were in relation to the eyewall of the hurricane. Because the frequency and strength of hurricanes are expected to increase, the study results support efforts to better manage hurricane-prone areas that harbor rare species.

“Even as the threat of major hurricanes increases, it’s important that we continue to manage habitats with best management practices,” says Henry. “This gives species that rely on habitat management the best chance to survive into the future. Without active habitat management, hurricanes will only accelerate extinction.”

Watch a short video about the study.