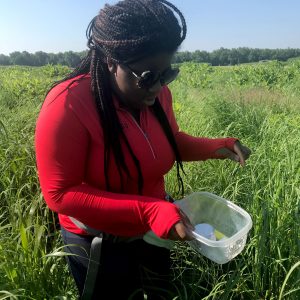 When we think of biofuel crops, a sprawling field of corn is often what we imagine. Though corn (Zea mays) is the most commonly planted biofuel in the United States, its climate mitigation potential is diminished by the need to till, replant and fertilize annually. W.K. Kellogg Biological Station researchers Jackson Helms IV and Nick Haddad and others, including Michigan State University entomologist Doug Landis, compared the vigor of insect communities in corn plots to those in perennial biofuel crops and unmanaged deciduous forest to gauge the impacts of each type of landscape on ecological health.

The study, which was published in Agriculture, Ecosystems & Environment, involved sampling plots of corn, switchgrass and restored prairie as well as forested areas on KBS lands, focusing on ant populations, to look at species richness and diversity, insect activity, and levels of pest suppression and presence of invasive ant species. Helms and his colleagues found that the native perennial biofuel crops supported more complex, robust ant communities and provided more ecological benefits than did corn.

“By focusing on one of the most prominent groups of wildlife in farmlands—ants and other insects—we show the need to rethink the way we treat landscapes,” says Helms. “Restoring intensive farmland to a more natural condition can benefit both humans and the rest of the environment.”