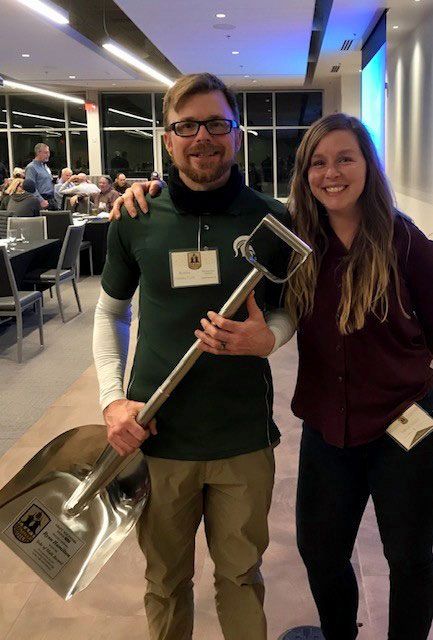 The Craft Maltsters Guild has singled out a W.K. Kellogg Biological Station staffer as an exemplary steward in the field of craft malt.

Ryan Hamilton, who works for KBS with the Michigan State University barley research and extension team, was presented with the Sole of Malt Award from the guild at this year’s Craft Malt Conference, held Feb. 7-8 in Fort Collins, Colorado.

“The craft malting community has been a home to me from the beginning, and I’ve always felt welcome, valued, and appreciated, but to be selected to receive the Sole of Malt Award is nothing short of amazing,” says Hamilton.

The award, according to the guild’s website, is named in memory of William Soles, the late co-founder of Grouse Malt House. People honored with the award embody “selfless and philanthropic stewardship of craft malt,” qualities for which Soles was well-known.

“I never had the privilege of meeting William, but … hearing so much about his kind nature, acts of service, and commitment to helping those in need greatly deepens my appreciation for his legacy,” says Hamilton.

Hamilton was recognized for receiving the award at the Great Lakes Hop and Barley Conference during a March 6 reception. Jesse Bussard, executive director of the Craft Maltsters Guild, delivered remarks about the award.

Hamilton studies cell and molecular biology at Grand Valley State University. He provides expertise on growing barley and malt production in an advisory role at both KBS and the Michigan Barley Association.