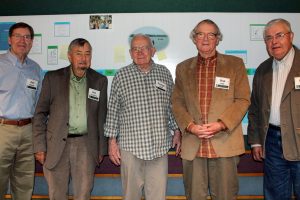 The W.K. Kellogg Biological Station lost a great friend with the passing of Donald Hall, Michigan State University professor emeritus of zoology, on Saturday, June 13, 2020, in East Lansing, Michigan. He was 84.

Hall was a freshwater ecologist and, before coming to MSU, he conducted groundbreaking research using a system of outdoor experimental ponds at Cornell University to examine the effects of nutrients and predators on the planktonic components of aquatic ecosystems. This work, done in collaboration with Dr. William Cooper and then-graduate student Earl Werner, was published in the prestigious journal Limnology and Oceanography in 1970. The journal devoted an entire issue to reporting their findings.

He joined MSU and KBS in 1969, one of the first resident KBS faculty members hired by then-Director Dr. George Lauff, and was promoted to full professor in the Department of Zoology in 1972. During his more than three-decade career in teaching and research at MSU, Don Hall played a crucial leadership role in fostering the growth of ecological and evolutionary research and training, as evidenced by his service as the second director of MSU’s graduate program in Ecology and Evolutionary Biology Program, or EEB. He filled that post from 1989 to 2004.

A passion for research and mentoring

When he came to KBS, he and Lauff sought to make the Station a premier site for experimental freshwater research by constructing a set of experimental ponds similar to those at Cornell. After receiving a substantial grant for the National Science Foundation and funds from MSU, 18 experimental ponds were built at KBS in 1972. The KBS ponds set the stage for a series of pioneering studies on freshwater fishes conducted by Don, his colleague and friend Earl Werner, and numerous graduate students. 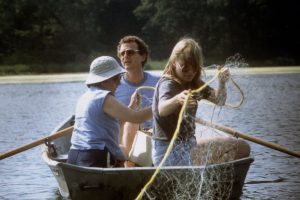 Hall’s research at KBS also included studies of plankton and fish at the Kellogg Bird Sanctuary in Wintergreen Lake. Several of his scientific papers, many done in collaboration with graduate students and postdoctoral research associates, are recognized as “classics” in the field. He took a great interest in mentoring students and was an academic advisor to more than two dozen graduates, several of whom went on to become leading scholars in their fields. Mathew Leibold, now a professor at the University of Florida, says of his passing, “It is indeed the end of an era, and makes me appreciate just what Don meant to me as a mentor and friend.”

Kay Gross, KBS director from 2005-2014, remembers, “Don was instrumental in recruiting Gary [Mittelbach] and me to come to MSU as graduate students and made sure we saw KBS on our interview visit. We could see the passion he had for research and KBS.”

Rich Lenski, Hannah Professor of Microbial Ecology and former EEB director, recalls that “Don was a wonderful friend and colleague and an enthusiastic leader of EEB(B) and supporter of the program’s graduate students and their research. He will be missed and remembered.”

No services are planned at this time, but his family hopes to have a future gathering. “We do hope to have a celebration of life and hope to maybe do that at KBS, one of our favorite places,” one of his daughters, Suzy Hall, shared. The family spent many summers at the Station.

In honor of Hall’s service, an endowed graduate fellowship was established when he retired as EEBB director. Contributions to the Dr. Don Hall Endowed Scholarship can be made here.