Home | Stories and blog posts | The one that got away (a Darter love affair): Daniel Oliveira 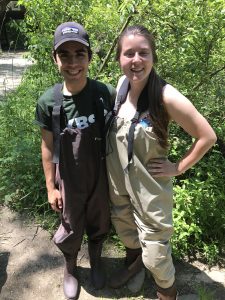 Who knew my summer in Michigan would include laying belly-flopped in a stream, yelling in frustration over the two-inch fish that had just bolted off, as my waders filled with cold water?

Maybe I should back up. My name is Daniel Oliveira, a junior from Clark University in Massachusetts, majoring in Environmental Science. This summer I ventured out of cozy New England not only to conduct my own research at Kellogg Biological Station (KBS), but spend time out of suburbia.

Before arriving, I had little knowledge of what Michigan would be like besides being sandwiched amidst the Great Lakes. Boarding the plane, I had no clue of the intellectual and personal adventure I was embarking on, or the role that KBS would play.

Despite the uncertainty of getting settled in to a new place, I was eager to get started both with my research and to explore my new summer home. From day one, KBS has felt like a home. Not only is everyone full of smiles, but the escape from the bustle of the city helped me tune out distractions. Having opportunities to go stream- and lake-snorkeling as part of my research, explore Michigan’s famous trails and dunes, and spend hours kayaking on Gull Lake made a summer experience that would be difficult to obtain elsewhere.

I could probably go on about the wonders of KBS and the joy of feeling reconnected with the outdoors, but what drove my transformative summer experience was the research. My mentor, Dr. Sarah Fitzpatrick, an Assistant Professor at Michigan State and part of the KBS family, has positively shifted my perceptions of academia while inspiring my own research interests.

The focus of her research is an integrated approach of ecology and evolution to understand underlying variation in natural and small populations, including those of conservation concern. While my research interests are certainly my own, those of my mentor, including her distinctive spirit, have influenced my direction for the better. 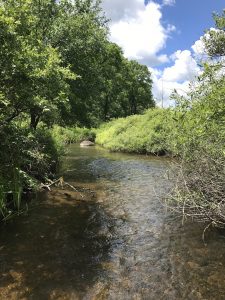 Augusta Creek, a shallow stream where Rainbow Darters are abundant.

My project, and why I found myself belly down in a stream, was a characterization of the phenotypic diversity of Rainbow Darters, These little fish are in the same family as perch, their larger cousins, but spend most of their time in fast-moving headwater streams throughout the Midwest. Likewise, despite darters being a diverse freshwater North American fish with over 140 species, many are endangered and endemic to particular watersheds.

As it turned out, the plan to collect Rainbow Darters from nine or more sites, determine individual thermal tolerance (temperature limit that they can withstand), and learn next-generation sequencing methods to get genomic data from each population was just a tad too ambitious.

As any field biologist will tell you, research methods rarely turn out flawlessly. On multiple occasions I found myself snorkeling in streams, waders full of water, all in attempt to catch the elusive darter. I knew they were there, as they often like to “dart” past you in the blink of the eye. However, actually keeping track of where they went and successfully getting them into a net all the while trying not to scream in anger as an hour’s worth of sampling to no avail is the difficult part. I have to admit, I found myself mumbling and screaming through my snorkel a few times more than I should have. Good thing KBS is a tranquil place otherwise!

In all honesty, the summer spent at KBS has taught me one of the greatest trials of doing science. More often than not, things do not work out. Methods fail, sample sizes are small, or outcomes are completely unpredictable. Regardless, my project did end up being a success, and I found some undocumented results regarding differences between lake and stream Rainbow Daters. The most important aspect of my experience however were the skills and experience I gained while here, including developing an understanding of my career and research goals that better prepared me for a future career in research.

I will always call KBS a home, even twenty years down the line as a biologist. While it is fun to joke that I might be back one day doing research or maybe even as an Eminent Ecologist, it is not really a joke, as returning to KBS would be a joy. At the end of the day, it is the place where I learned first-hand how to be a scientist, even if a lot more darters got away than I anticipated.

Daniel Oliveira is a student at Clark University, and was an REU in the Fitzpatrick lab for the summer of 2017. 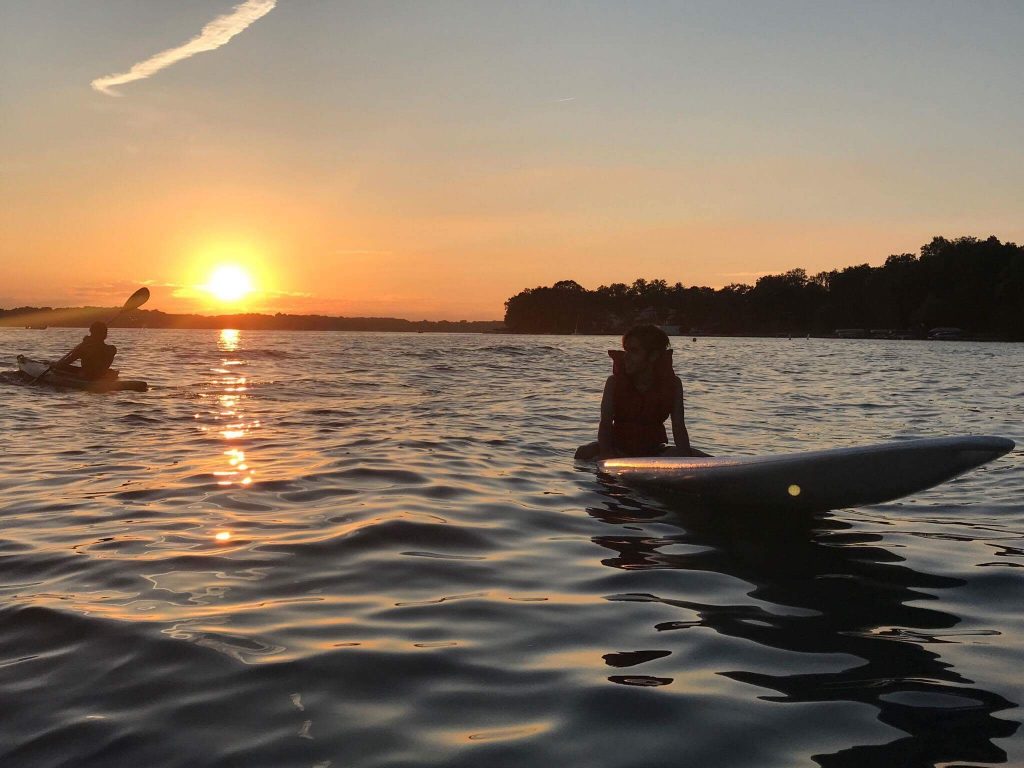 An evening spent in the water with a background Gull Lake sunset.