Some 150 people from around the country had planned to visit KBS in April 2020 for the fourth annual meeting of the USDA’s Long-term Agroecosystem Research network, or LTAR.

But in late March, as concerns about the novel coronavirus were growing globally and after Michigan saw its first confirmed cases, the program committee, chaired by Phil Robertson, began working furiously to transition to an online format so that the meeting could still be held. 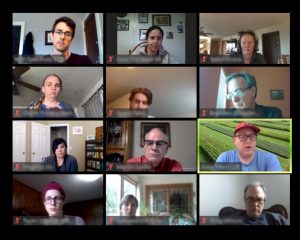 The conference drew 300 participants for two days of plenary talks and concurrent small group discussions, so it was a challenge to design and implement. It was the first large, virtual conference that KBS has hosted.

S. Carolina Córdova, a postdoctoral associate at KBS and a member of the program committee, co-ran the event and noted that quickly transforming the conference to a digital, remote event was a community effort.

“This event was not possible without the help of many KBSers, plenary speakers and moderators,” she says. “We’re proud that we were able to pull it off and thank everybody for their help and patience, especially the KBS IT staff.”

Organizing an online version of a conference, complete with multiple breakout sessions occurring simultaneously, required the use of many different Zoom accounts, as well as practice sessions with all speakers.

“The devil is in the details, and, in order to have the audience successfully engaged, everything needs to run smoothly, be interactive, and of course, offer great talks,” adds Córdova.

Many KBS researchers and staff members loaned their Zoom accounts to the meeting so that KBS information technology staff, Daniel Gorentz and Stefan Ozminski, could provide virtual rooms for 25 simultaneous sessions.

The overarching goal of the conference was to engage LTAR network members in planning for future experiments and developing new cross-site collaborations that promote sustainable agriculture. For that reason, breakout sessions served to engage participants in discussions of standardized metrics that could be used to measure sustainable agricultural intensification, engaging cross-site collaboration, and new projects and enhancements of existing projects for upcoming seasons.

Córdova noted that organizers expected about 150 people for the in-person event, so the necessary shift to a virtual format opened the meeting to a much larger audience. In breakout sessions, up to 30 attendees were able to engage with one another as well as with session presenters, which made the experience much more interactive. A group of scientists in Florida hosted a virtual mixer to round out the conference.

Robertson, who moderated the overall meeting, notes, “Virtual meetings are challenging to provide the excitement and collegiality of in-person meetings, which are so important for developing shared ideas and establishing new scientific collaborations, but participants went with the flow and made the best of exceptional circumstances. We hope to meet in person next year, building further on the memorable success of the KBS meeting.”

Next year’s LTAR meeting may well return to an in-person format. But if it’s held virtually, this year’s planning committee has a wealth of sound advice and guidance at the ready.

About the LTAR network

The LTAR network is comprised of 18 sites around the United States, where agricultural scientists address long-term questions related to the intensification of U.S. agriculture. More than 400 scientists work within the network, which KBS joined in 2015.